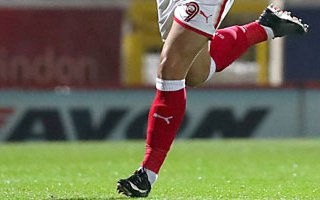 The Sky Bet Player of the Month winners for February 2018 are in, which has seen Marc Richards claim the League 2 award.

Swindon Town striker Marc Richards has been named the Sky Bet League Two Player of the Month for February.

Have goals, will travel. Swindon is the 35-year-old forward`s 11th club of his career, yet the results are the same. Equally adept with head and feet, his five goals in six games owed everything to his predatory instincts and calmness.

Swindon Town caretaker manager Matt Taylor said: “It is great for him because what Marc has shown throughout his career is that he scores goals.

“I believe that it was a real big coup for us to get him and it was important that we got a goalscorer in.”

“Marc is a great lad, he’s a good leader, he’s got loads of experience and he’s a mate of mine so I am really happy that he’s won the award.”

“He’ll want to kick on now, get more goals and fire us towards where we want to get to.”

Richards said: “I am obviously delighted with how things have gone. I couldn`t have asked for anything more from the club, my team mates and the staff. To come here and to hit the ground running has been the perfect start for me and to pick up a few goals on the way has been a big help.”

Sky Sports` EFL pundit Don Goodman said: “When you`ve been at a club for four years and had the success that Richards had at Northampton, it can be hard to leave that all behind and start again.

“Swindon definitely presents a new challenge, but it`s one that Marc has taken to with gusto, firing the goals that have brought them into Play-Off contention once more.”

Sky Bet EFL trader Mikey Mumford said: “Marc Richards knows this level inside out and his goalscoring statistics have stood up even in the latter stages of his career.

“The Swindon frontman won`t have had too many better scoring months than February though, with those five goals in six games propelling his side back into the promotion picture in League Two.

“It`s proving to be a smart piece of business by the club who plucked Richards on a free transfer after his release from Northampton, and his goals have might be difference between the Robins justifying those 7/2 promotion odds.”

Who Misses Out For Swindon This Week?